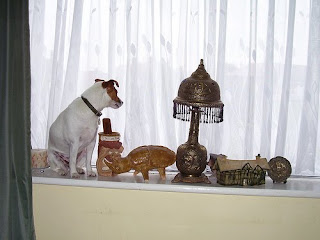 Did I mention that I'd begun writing the new version of BR? Anyway, it began to appear on my puuter screen on January 16th. I hadn't intended to spend that evening working but TV was as boring as it usually is, and while busy washing dinner dishes the start of the novel came to me. My fingers started itching, and so it began.

Do your fingers itch, literally burn and itch, when you've got a tasty idea demanding to be written or painted or photographed?

I find myself pulling odd facial expressions as the images of the idea flows through my mind. It's like watching a cinema screen in 3D inside my head. Who needs a remote control zapper when with a flick of Will you can rewind, rewrite, bring details up closer or move away as the story bursts into life internally? Then the finger-itching starts.

A literary agent, having read a synopsis for Tamsin and Rowan, recommended that I include the genre label of Urban Fantasy in descriptions of my work. Hmm... Well the novels (and some of my shorties) are set in Wirral and Liverpool, so I guess that makes 'em urban. And they do have beings from folklore included, plus a splash of metaphysics and a dash of magic (not the Potter variety), so that's firmly within the Fantasy genre.

On the other hand, the term Urban Fantasy makes me think of bored housewives daydreaming whilst pushing shopping trolleys round a supermarket, or gazing longingly out of lounge windows in the hope of seeing some impossibly gorgeous guy strolling up the drive with flowers and champagne.
Posted by Adele Cosgrove-Bray at 11:36 am