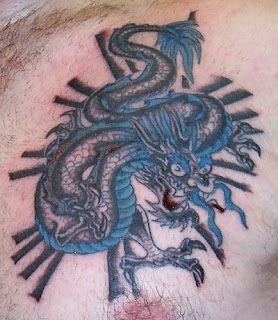 Richard spent a rough night due to the cold he's caught. Consequently he spent half of today in bed. He's sat in his Man Cave now, watching a documentary about The Beatles, with Saffron purring in his lap. He likes some of their music but not all of it. Saffron couldn't care less what's playing so long as she gets her ears tickled.

The photo depicts one of the tattoos he's done recently.  To see more, visit his website: http://www.myspace.com/riche_tattoo_artist

Anyway, while he was snoring triumphantly in bo-bos, I was busy tapping away on this puuter. Today's word count for Bethany Rose is 1,879 words. I love it when a character does something unexpected. I had no idea Bethany was going to move into a haunted house! This MS is very different in mood from Rowan. Whereas Rowan has a languid romantic feel to it, BR is much, much darker.

Did anyone tune in to 7 Waves Radio today? Four members of Riverside Writers were guests on Cath Bore's Lunchtime Forum show: Tim Hulme, Peter Caton, Eileen Murphy and Peter Hurd. I'll be back on air at next month's session, having volunteered to opt out this time to allow some other people a turn on air.

No news about the postponed Wirral Bookfest 2009 yet; and no wonder, with the situation regarding the threatend closure of so many of Wirral's libraries and other community resources still undecided.

The good news, though, is that playrite Sylvia Taylor has agreed to visit Riverside Writers and give a talk/workshop on script writing. The date is yet to be confirmed. Sylvia has co-written for the BBC and used to run her own theatre company. Currently she's making small films (which have been shown on the huge public screen in Liverpool city centre), planning full-length films, and works in community art development.
Posted by Adele Cosgrove-Bray at 11:44 am