Richard has the bubonic plague a headcold.

2am saw me padding around the living room, wide awake. Hubby was snoring like a jammed lawnmower, which is not conducive to restful meditations.  So I'd come down here, lit some incense and read for a while.

Mum's not feeling too well. She had food poisoning after eating out, followed by a cold, and now her balance has gone haywire again. She's had inner ear infections before, several times that I can remember. Evelyn stayed the first night with her and took her to the doctor's in the morning. When I spoke to her, Mum said she was feeling better but the Stenetil tablets make her very sleepy.

Two friends were caught up in the recent airline collapse. Lynn and Lee had only three days left of their Greek island holiday when their hotel manager told them their room had not been paid for. They were given the choice of paying £600 instantly--which was the cost of their room for two weeks--or sleeping on the beach with police charges hanging over them. Lynn and Lee had already paid for the hotel when they'd booked the holiday. On top of this, their flight home no longer existed (due to the airline collapse) so they had to pay for another flight home. Obviously, they intend to claim against their travel insurance. But their holiday was seriously marred. Lee should have been walking around a sunny Greek island, when instead he was pacing round our algid patio with Emily trying to eat his shoelaces. 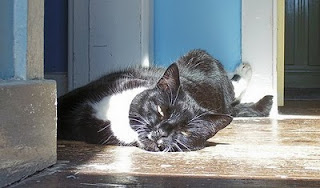 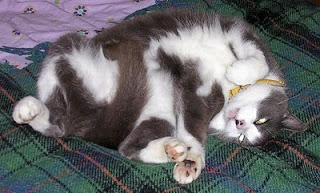 Posted by Adele Cosgrove-Bray at 1:02 pm