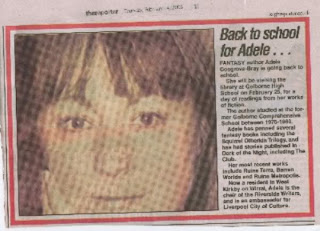 The article makes it sound like I'm the sole author of Ruins Terra, Ruins Metropolis and Barren Worlds, rather than being merely a contributor to each. Oh dear.... Not my doing.

So, yes, yesterday saw me back at Golborne High School by invitation of Sylvia Taylor, gelertandbess, actor, playwright and filmmaker, who also works to promote and develop the arts within the school. We’ve known each other since we were aged eleven, and used to sit next to each other in English and Computer classes at Golborne High – or Golborne Comprehensive School, as it was then named.

Certainly it was interesting to see my old school again. Some things haven’t changed at all, while some are entirely new to me – such as the digital photography suite and the banks of computers in the school library. Back in our day, there was one computer for the entire school! And even that wasn’t a PC as we think of them now, but a monitor and keyboard which had to be linked by telephone with a real computer at another location. This was back when most computer information was stored on punch-cards, and when 7” floppy discs (in a thin card covering) were state-of-the-art technology. Eeeek, this makes me sound prehistoric!! It’s an indicator of how fast computer technology has moved on, really.

I met a few of my old teachers, too, such as the long-suffering Mr Kennedy who did his best to try and teach me maths and computer programming. He deserves a medal for perseverance. Let’s just say they weren’t exactly my best subjects, hmm? He recognised me immediately. Funny, that.

Soooo, I read Seagull Inn from Ruins Terra to two separate groups of pupils. They seemed to enjoy it. One little boy, with his finger firmly rummaging around his nostril, stared at the book in my hands and asked if I’d made it all by myself. Both groups were then prompted to ask about writing, and Sylvia tried to encourage them to consider the possibility of a career in the arts. Part of her job at the school is to show the pupils that a creative career is a viable possibility.

After lunch in the new school canteen (the quiche was lovely!), Sylvia drove me back to Newton-le-Willows train station. It was great to see her again, definitely. She’s hoping to come here for Easter, which will be fun. She wants to visit Hilbre Island for herself now!

That same evening, I was at this month’s meeting of Riverside Writers. I was able to discuss the details of Words from Wordsmiths with the head librarian, and was then able to tell Riverside Writers members that they’ll be reading their work before an audience on April 7th. This was the first they’d heard of it, for the most part! *chuckles*

February’s writing project was set on the theme of “The Group”, and various members read aloud their creative efforts for that. I read Project, which I had been meaning to put before the group for a while but had not had time during previous meetings. The story will be published in Barren Worlds fairly soon, but I wanted to see how the group reacted to it, as it’s a divergence from my usual style, being more Sci-Fi than Dark Fantasy.