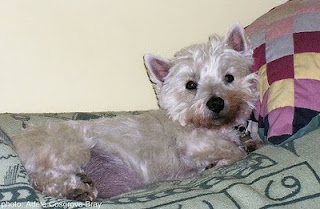 It looks sunny but it's freezing out there. Emily has dragged her increasingly tattered fleece blanket to the patio windows where she's made herself a nest. Ygraine is reclining on my patchwork cushions in the other room, while pretending to be asleep.

I hate to disturb them but tough. They are about to help me continue beaking in my new purple walking boots. My trusty old ones (once blue and grey, now merely grey-ish and grey) are deliciously comfortable but have sprung a leak. They've lasted for something like seven years, and as they regularly get partially dunked in sea water that is no mean feat.

The new ones are nowhere near as comfy. At the moment it feels like walking on springy bricks. Still, they are my favourite colour - and we all know how earth shatteringly important that is. Ahem.


Monday saw me putting in a guest appearance on Cath Bore’s morning show on 7 Waves Radio on 92.1 FM.

Based in Leasowe, this community radio station has been granted a five-year broadcasting licence. The base is undergoing major renovation. In fact, the builders were waiting for Cath’s show to finish so they could remove the old ceiling above our heads.

Cath and I talked about the Wirral BookFest, and my own contributions to this literary festival as part of Riverside Writers’ presentation of Words from Wordsmiths. This was to take place at West Kirby Library that same evening.

She asked about Riverside Writers itself, so I talked about our member’s diverse literary interests which range from poetry to non-fiction to a wide range of fiction genres. Some of our members are new to writing, others are published. Some members write purely for fun, while others are developing writing careers.
I also read aloud one of my Dark Fantasy stories, called New Year’s Day, which is set on Hilbre Island and features the selkies, who can change between human and seal form. This was published as part of A Wirral Otherkin Trilogy (pbs. Amazon Shorts, 2006), and the concept is taken from ancient folklore.

6.30pm found me in West Kirby Library, helping to set up the microphone in readiness for Words from Wordsmiths. The library staff did a fabulous job with arranging seating and providing refreshments.

The material offered something for all tastes, and included poetry, humorous fiction and thoughtful tales. I read aloud Seagull Inn, which was published in the Ruins Terra anthology by Hadley Rille Books.

Despite our event coinciding with the BookFest’s official launch in Bromborough, when the public were invited to meet Jojo Moyes, Mike Gayle and Jenny Colgan – who are successful contemporary novelists – we still managed to attract a large and lively audience. In fact, Riverside Writers have already been asked to hold another, similar live event next year!

Tuesday afternoon found me at West Kirby Library again, this time for Best Words, poetry readings from John Siddique and Wirral’s Young Poet Laureate, Holly Green. They read a combination of their favourite poems plus their own material.

At only fifteen years of age, Holly Green displays a remarkable talent. She’s a PR agent’s dream; petite and pretty, with a lovely mop of curling hair, a likable manner and a clever turn of phrase. Her witty poem about the planned revenge on an offending boy had everyone chuckling.
Posted by Adele Cosgrove-Bray at 4:21 pm