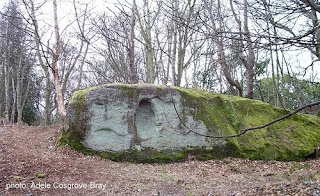 Can you throw some light on this puzzling stone carving? Located on the foot of Caldy Hill, facing Thurstaston Common, this large slab of rock has obviously lain here for centuries, if not millennia. It is covered in lichen and moss, which has softened the edged of the graffiti carved into it. There’s even a small face peering from the rock.

But the real mystery is the strangely-shaped indentation which looks as if a person could fit their back and head inside it. Think of a vertical oblong, with the top two edges rounded off and with a smaller round bit on top.

What was it for, and who made it?

Was it a modest shelter for shepherds, who would perhaps light a fire then nestle into this odd chair? But surely a small hut would have given more shelter, especially if the wind was blowing towards the rock face.

Was it, as someone suggested, a Celtic ossuary carved to hold a display of bones or similar items for religious purposes?

Was it a Viking look-out point? The location seems to make this unlikely, as it does not offer a particularly advantageous view of the surrounding area
Posted by Adele Cosgrove-Bray at 12:51 pm

Email ThisBlogThis!Share to TwitterShare to FacebookShare to Pinterest
Labels: wirral