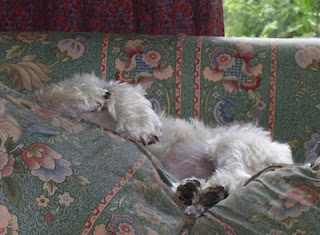 Gardening can be hard work, as Ygraine demonstrates in this photo.

Emily has discovered how to jump over the fence. As we'd like to keep our dog (and not be sued) we now need a higher fence. Ygraine has never once escaped. Emily has earned the nickname Houdini, and is currently under house arrest until the fence can be installed.

It'll be delivered on Friday. But before it can be errected, the thorny hedge which I've been coaxing to slowly grow since we moved in now needs hacking back again. Now, when I say thorny I mean thorny. Think of 3" needle-thin spines every finger-space along every branch. As a deterent to two-legged pests it's done an excellent job. A certain four-legged scamp, however, just ducks underneath it then scrambles over the old low wire-mesh fence.

So we spent part of the weekend pruning back tree branches and branches from a long and towering (not-thorny) hedge. This afternoon I began the task of pruning back the thorny hedge. I've done half of it. Enough was enough, for now!

I have finally finished writing (albeit for a tweak and polish) the third section of Spanish Jones. It's set on Middle Eye, and continues my theme of selkies (seals which can take-on a human shape) which has been used in other stories. This time, it's selkies battling with witches. At 6,500 words, this is easily my longest short story so far. The submissions deadline falls on October 31st, so I've time to polish it yet. I had three deadlines all falling on the same date, and I've managed to make them all. Whether the respective editors like the work is another matter, of course! So, now it's back to getting on with Rowan again.

Richard and I were in Liverpool on Sunday, to look at new gas fires and fire surrounds. Then we went to the cafe where my niece has a part-time job, and we enjoyed a lovely cup of tea while the poor girl was busily waiting on tables. Eeeek, I've never seen her move so much before! I tell you, that little lady can work when she has to! Her boss praised her to us, without any prompting
Posted by Adele Cosgrove-Bray at 1:58 pm