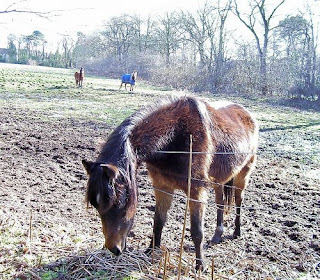 Our two dogs took us for an enjoyable woodland walk around Frankby at the weekend. (Yes, I know it’s now nearly next weekend but I’ve been busy, ok?!!) There were carpets of snowdrops under the trees. A friendly pony came to say hello when we trudged along the muddy path beside his field. Emily was terrified of the bewildered creature, and hid behind Richard’s feet.

Emily is still learning to walk on the lead properly. She’s got the general idea but is distracted by scents very easily, and noisy traffic unnerves her. She has a habit of stopping dead, which consequently means that whoever’s walking her has to be ready to do likewise or else nearly fall over her.

We called in to The Farmer’s Arms, but escaped to the garden rather than struggle to talk over the exuberant crowd of football enthusiasts who were happily yelping and yowling at the big TV screen. (Fear not, I’ll resist the temptation to launch into one of my diatribes about boring sport!)

I’ve now finished the first draft of a short story set on Hilbre Island, called Seagull Inn. The finished MS is intended for submission to an anthology whose brief requested pieces with a strong emphasis on history and archaeology.


(Insert conversation with Slightly Dippy Relative: “But history didn’t exist when they put the archaeology there!”)

Anyway, trying to segue factual information into a story without turning that story into a history lecture is no mean feat. People read fiction primarily for entertainment, after all! Consequently, it took me approximately a week to produce 3000 words – pathetically slow, by my usual standards. Maybe I was just trying too hard, as the very act of over-concentrating can raise a barrier to many things, creativity included.
Posted by Adele Cosgrove-Bray at 11:40 am