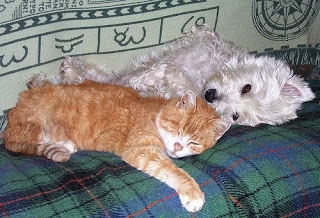 What exactly is the point of Christmas cards? Why do people who've not picked up the phone to say hi once during the last twelve months suddenly feel compelled to mail me images of bloated snowmen?

One card arrived with "write soon" scribbled in one corner. Hmm, if memory serves me well, this same person had written a similar message on the card she sent last year, and when I did write a letter no reply was forthcoming. I won’t be bothering again. Bah humbug.

Certainly we’ve had no real snowmen here this year. In fact, we’ve not even had an overnight frost. It’s so mild that I’ve got roses coming into full bloom in the garden, and around the village are cherry trees in flower. This is not normal winter weather!

Anyway, half of the seasonal nonsense is now over, and the shops are desperately trying to sell us the same junk which we didn’t want before the 25th. We had to brave the insanity of Birkenhead on the 24th, unfortunately, as my digital camera isn’t working properly. It keeps switching itself off, and that’s when I can coax the reluctant gadget to switch on in the first place. It’s got three months to go on its guarantee. “Oh, it’s the battery”, said the over-confident little (7ft tall) man in the shop. Apparently I was using the wrong brand, which seems somewhat unlikely as that particular brand has worked fine for the last nine months. The pesky camera worked perfectly in the shop, of course. When I got it home, it wouldn’t switch on at all. New batteries, another set of new batteries… No joy. So guess who’ll be heading back to the shop very soon. Grrrrrr!!

Yesterday I sent out a newsletter for Riverside Writers, and organised a one-off snail-mailshot for those who haven’t got emails yet. Don’t ask me how a person hopes to be a writer in today’s world if they’ve not learned how to use a computer. As I said to Sylvia last night, it’s akin to someone from the Middle Ages clinging onto their quill and refusing to consider the value of those new fangled printing presses. (Or is this just me being snarky?)

Much of yesterday was spent writing Shell Boy. Did it really take all day to produce five hundred words? Hmm, I’m afraid it did… Sometimes that’s how writing goes – with me, anyway. One day words will flow so swiftly it’s as if my typing isn’t quick enough to keep up. On another day, however, it’s like treading through treacle.

While writing Shell Boy, I was thinking about the film Death in Venice, and of those who indulge in people-watching along the promenade here. I was also thinking of a valued friend of mine, an Italian who shares my penchant for collecting shells, in particular an LJ post of his in which he had smiled kindly in response to the interested gleam in an elderly person’s eye. He had recognised that, in time, he might well find himself cast in the role of the aged and easily overlooked admirer.

Rowan appears anonymously in Shell Boy, and his character is partially inspired by this shell-collecting friend of mine.

I was also thinking about a role of Michael Cane’s which had him declare that he’d been through two wars, had held friends while they died, had loved one woman with more passion, and had experienced more of a life completely experienced than the youngster who was giving him earache. (If this isn’t an altogether accurate rendition, I accept full responsibility, my memory for films being notoriously suspect! In fact, I can’t even recall which film this was from.)
Onto something else…

Recently I wrote a book review of Dancer by Colm McCann, in which  I mentioned an old newspaper clipping depicting a photo of Rudolf Nureyev which I’d kept since childhood. Having written this review, I wondered where this clipping had gone to. I couldn’t imagine throwing it out; it is one of that particular category of personal treasures in which no-one but the owner could possibly find any value, and yet which are precious nonetheless.

Waiting for the bath to fill, I browsed through some old books which are crammed onto a shelf in the front bedroom, which is destined to become my writing office eventually. Meanwhile, it’s piled high with large boxes containing our new bathroom, DIY tools, paint tins and “useful stuff” ad infinitum. Anyway, I happened to pick up a paperback by Richard Bach. The spine is damaged and some of the pages have come loose, but never mind about that. It had been at least ten years since I had last read Illusions. So I opened up the battered front cover with a smile – and there was Rudolf, coolly gazing out at me. He’s now stuck to the side of my computer desk.
Posted by Adele Cosgrove-Bray at 12:39 pm