Decay of the Armchair 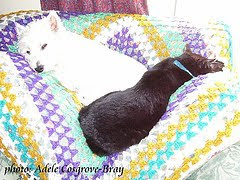 ...Just as Mishima's "angel" was first encountered glowing with promise before the slow slide into decay, this armchair was once a normal shape. The rear cushion has certainly fallen into a form of decay - or at least something of a structural re-shaping due to the regular attentions of various sleepy four-footed members of this household. This photo explains everything.

My computer is three years old tomorrow. You really wanted to know that, didn’t you! It’s Tristan’s birthday on the 9th, too. The age of the now-defunct Brotherhood of the Jacuzzi almost corresponds to the age of my computer. I say almost, because… Oh never mind; that glorious episode of cyber-history is over now and 95% of you haven’t a clue what I’m reminiscing about anyway!

My poor mother is going through the mill right now, what with my father’s slowly deteriorating condition, her brother having recently died, one of her sisters having recently had a mastectomy, and now she’s learned that a close friend of some thirty-years standing has been diagnosed with Hodgekinson’s lymphoma. What can anyone say in such situations? “Don’t worry, it’ll be ok,” sounds idiotic. “It’ll all work out in the end,” is what most people want to hear but it simply isn’t true.

If any person was to keep a dog in the condition which my father now is in, they’d be in Court on cruelty charges. What kind of insane morality insists that humans deserve to suffer worse than a dog? It’s barbaric. Society imposes its own fear of reality on those who are least able to help themselves.
Posted by Adele Cosgrove-Bray at 1:17 pm